The Vibration of Colour 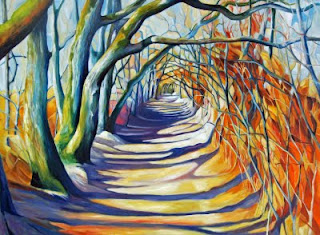 I have been debating the issue of colour this year. When I first started painting, the colours I used were very strong and vibrant and they still are.  Take a look at this one for instance.  It was painted in France and is the meditation walk at Plum Village Buddhist centre - I wonder if it could have been more 'meditative' in it's choice of colour.  I got so bound up in that tunnel, that the colours took over even though this painting is a lot quieter than some I have produced.  This one is also quite a large canvas - 102 x 76 cms.

I  start out intending a softly, softly approach, only to feel I need just a touch of a cadmimum here or there and pretty soon, whoops - there I go again!  I can't resist the richness of oil colour  - the sheer physicality of painting with a luscious red next to a vibrating green, an Alizarin crimson next to a Naples yellow - simply delicious!

I love to see paintings where the colour vibrates. Take Rothko for instance.  You will only get the full power and drama of his colours when you really sit and study the canvasses in his special gallery at the Tate Modern in London.  Maybe your  response to them is dismissive - large canvasses which are purely blocks of colour?  But for me those blocks are not only technical wizardry at its best, but they also stir some very strong emotions.  It is the way the colours sing and vibrate. And it is that vibration that comes about as a result of understanding how colours react one with another and layering them to achieve the ultimate glow.

By layering the paint, even whites will take on that extra quality. I have seen this in the work of the French painter  Michel Steiner for example.  Just look at this lovely study.  Hardly any colour at all, a deceptively simple painting.  But I know Michel and I know that his work is built up very gradually with many layers, allowing each to dry in between.

A lot of patience is required and the ability to have several canvasses on the go at the same time.  I currently have 5 in various stages of progress!  All part of my determination to build up colour in layers and perhaps less emphatically!  Take a look at the colourful pieces on my web site and watch this space for changes!