The 'Good Enough" painting or knowing when to stop!

If you paint regularly you will know that the art of 'knowing when to stop' takes a long time to learn. I still find it difficult. I was listening to an artist talking on a programme the other day about the latest Van Gogh exhibition that is on in London at the moment. There is a portrait of a woman that he completed in an hour. In spite of his lack of public recognition during his life time, he obviously knew when he had completed something to his own satisfaction. On those rare occasions when the painting seems to 'paint itself' I think perhaps I should stop there at the end of that first session and not allow that critical person to come along and 'tidy up' my painting a day or so later! I did wonder whether the example below was a case in point. Another mountain peak - I'm still hooked and this is number four. In the first one you can see where I was at the end of the first session and the finished canvas as of this morning. 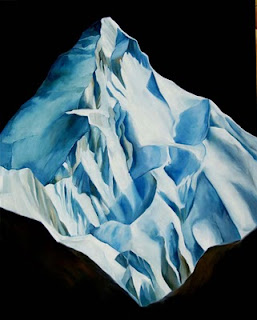 I'd like to leave this blog with a quote by Picasso from an article I read about him recently. I think it is  food for thought - perhaps even something for the vociferous stars of today's art world to ponder! The quote refers back to his previous comments about his huge success and wealth:

"When I am alone with myself, I have not the courage to think of myself as an artist in the great and ancient sense of the term. Titian and Rembrandt were great painters I am only a public entertainer who has understood his times and has exhausted as best he could the imbecility, the vanity, the stupidity of his contemporaries.  Mine is a bitter confession, more painful that may appear, but it has the merit of being sincere!"
Posted by Annie Taylor at 03:47