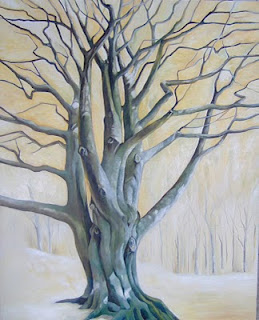 I am working on three tree paintings at the moment, including the one you can see posted in my last blog.  I am still resolving elements of all three, but I thought I would post them while they are still in the melting pot as they are part of the same series.

I have painted the big tree before and wanted to approach it again in a slightly simpler way.  Initially I thought I would leave it stark against the canvas with no background at all, but that idea has changed and I have had another thought about painting it for a third time, which I may try next.

The restricted palette this year has been very exciting and partly influenced by looking at daughter Beth's work (http://beth-nicholas.blogspot.com) on a regular basis.  Take a look and you will see what I mean. 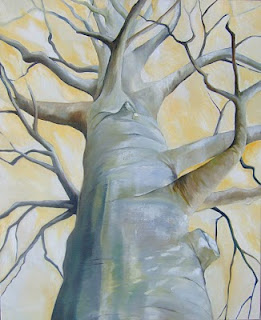